Here on our website, we've listed the chapter synopsis from the book's expanded Table of Contents. Thesis statements are then provided for the main source(s) discussed in each section of the chapter, along with a list of additional readings discussed in the section. Where possible, we've provided links to publicly available sources. To read our detailed synopsis, discussion, and thoughts about the practical application of the ideas presented in the sources listed below, buy the chapter by clicking on the cover image (or buy the entire book).

In this chapter we cover topics we consider to be essential for executives in the 21st century, but that do not necessarily require an entire chapter to introduce the basic concepts. Each of these areas is becoming a more important component of our society and understanding how modern organizations operate.

In 2005, Business Week referred to Peter Drucker as "the man who invented management." Drucker published 39 books from 1939 to 2008. We summarize his book which particularly emphasizes management challenges involved in leading a nonprofit organization.

Thesis: Ensure everyone lives the mission. Be action-oriented and driven by results. Know who your customers are. Define performance concretely and keep score on yourself. Allocate your own life, make yourself a leader by focusing on what you want to be remembered for. Develop your strengths, not your weaknesses.

The field of cognitive bias has its roots in research conducted in the 1970s, with an explosion of research volume since the 1990s. We ride along with a recent edition of a textbook that catalogs and summarizes various decision-making biases to which we are all prone.

Thesis: People are bounded in the time they take to make decisions, their rationality, their awareness, and their ethicality. Individuals tend to take cognitive shortcuts, which result in mis-estimating risk and probability and making suboptimal or inconsistent decisions even when the stakes are high. Understanding these tendencies can support better decision-making and better evaluation of others' decisions.

The concept of marketing has evolved dramatically in recent decades. Its focus has moved from that of simply finding buyers, to differentiating products, to creating customer loyalty, to improving competitive position as an equal partner with strategy.

Thesis: Marketing is inseparable from strategy, and the rise of strategic alliances requires marketing to take on new responsibilities in defining what gets done inside and outside the firm in order to best meet customer needs.

Thesis: The market orientation of a business is an important determinant of its performance. Marketing orientation is facilitated by senior management's emphasis on responding to customer needs, higher interdepartmental connectedness and less conflict, compensation based on customer satisfaction, and decentralized decision-making.

Much of the quantitative research in economics and business over more than a century has utilized linear models that allow a logical progression from assumptions to predictive conclusions. This has been productive, but has confined research to situations where these mathematical tools can be applied. The use of models of complex adaptive systems allows researchers to explore a much richer range of phenomena. The field is young but has already yielded a better understanding of business and social phenomena.

Thesis: A complex and adaptive social system consists of interdependent interacting agents whose micro-level behavior responds to the macro-level patterns those agents produce, resulting in a system that evolves over time. Computational modeling tools are well-suited to understanding such systems. A wide variety of social phenomena (e.g., political, financial, economic, and natural behaviors) appear to be better understood using the perspective of a complex adaptive social system. 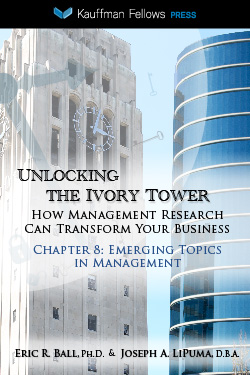